Interview: Behind the Scenes at GilletteLabs

Home › Interview: Behind the Scenes at GilletteLabs

In summer 2019, Gillette launched a new brand, GilletteLabs. GilletteLabs is all about continuing to innovate the way that men shave, and in its first year alone, this has resulted in innovations that were previously unthinkable, including the Heated Razor.

The Heated Razor was designed and developed in Kronberg in Germany, where one of our leading development sites is located.

As part of the razor’s launch last year, German blogging duo Frank and Philipp Lin visited the Kronberg Innovation Centre. Here, they learnt all about the Heated Razor’s development from Head of Research and Development Gregor Meissner, who they managed to grab for a fascinating interview. 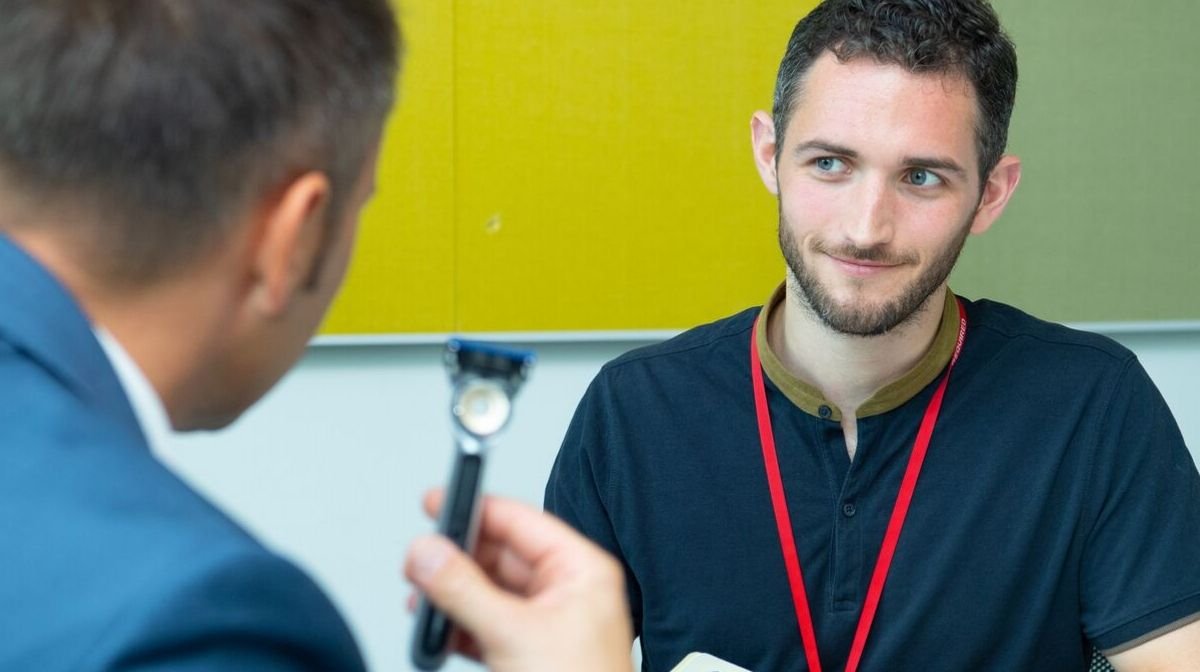 What Sparked the Idea for the Heated Razor?

Gregor: Consumers have been compensating for years and it’s quite simple – I was one of them myself. You take a wet razor and after every second or third scrape on the face, you rinse it under hot, running water, and that feeling of warmth when the razor returns to your skin feels very pleasant.

Consumers like this, the developers liked it, and so it was a no-brainer that a Heated Razor should be our new product.

What is the Effect of the Heated Razor’s Warmth?

Gregor: We’re seeing a change in consumer behaviour when it comes to shaving. The warmth omitted by the Heated Razor provides a pleasant feeling, which means men typically move the razor more slowly and more consciously over their skin, applying less pressure as a result.

With two temperature levels of 43°C and 50°C, every guy can decide on their preferred level of heat, and bring the luxurious sensation of a Turkish shave to their own bathroom.

Does the Heat Strip Make it More Difficult to Trim a Beard?

Gregor: The presence of the warming bar shouldn’t make it more difficult to trim your facial hair. By turning the razor over and selecting the sixth trimmer blade, you can edge your beard to perfection. The majority of our razors since the Fusion5 have featured that sixth blade for precise trimming.

The Heated Razor’s advanced five blades and ‘FlexDisc’ technology allow the razor to adapt perfectly to the contours of your face, meeting the demand for quality shaving.

Why Was the Heated Razor Developed in Kronberg?

Gregor: We have a great deal of expertise here in Kronberg – more than at any other P&G facility.

In Boston, the main focus is on creating razor blades and blade heads, while the Innovation Centre in Reading focuses more on idea generation and consumer research.

However, in Kronberg, we have the ability to bring electromechanical products to the market and to develop them in a series at a high-quality standard, so Kronberg was the obvious choice.

The Heated Razor Took 3 Years to Develop – Is that Typical?

Gregor: Three years is actually pretty speedy! Normally, we create a product of this kind in series, which means that we clarify everything beforehand, run trial tests, and only then move on to the next step.

But with the Heated Razor, we wanted to get to market quickly, so we deliberately developed some components in parallel.

What Were the Biggest Challenges in Developing the Heated Razor?

Gregor: We had to the develop the blade head from scratch so that the heat from the handle (where the warmth is generated) reaches the skin directly via the blade head – this is a breakthrough that’s never been achieved before.

We also had to develop a heating element that’s small enough yet strong enough to transfer the heat to the skin on a small surface via the heat strip.

We had to get the geometry and ergonomics of the handle right too, so that when a customer holds the product in his hand, he immediately says: “Cool, this feels like a Gillette razor!”

Who is the Heated Razor Most Suitable For?

Gregor: The Heated Razor is designed for any man who wants to experience something new from his shaving experience.

If you’re looking for an extraordinary shaving experience, the GilletteLabs Heated Razor is a must!

Mister Wharff: Feel Like ‘King of the Jungle’ with the Heated Razor

How to Prevent Shaving Cuts

How to Grow a Handlebar Moustache

How to Grow a Soul Patch Beard

A Man’s Guide to Oily Skin

Reset Your Grooming Routine this Movember