How to Get the Most Out of Your Heated Razor

Home › How to Get the Most Out of Your Heated Razor

The GilletteLabs Heated Razor is designed to transform your morning routine at the touch of a button. It’s our most innovative razor yet, with our most advanced blades to deliver incredible closeness and comfort while you shave.

With different temperature controls, wireless charging and blades that need changing, your first time using the Heated Razor can come with a few questions. Here, we answer your Heated Razor FAQs to help you to get the most out of your ultimate warming luxury shave:

What do I need to know before using my GilletteLabs Heated Razor for the first time?

Before its first use, the GilletteLabs Heated Razor needs to be activated via the charging dock – you’ll be unable to switch it on without this step.

All you need to do is plug in the charging dock, place the razor onto it in an upright position, and automatic charging will begin. You’ll notice a regular white pulsing from the dock indicator, confirming that the razor is being charged.

We recommend charging your Heated Razor for at least one hour before its first use.

How do I turn the Heated Razor on?

All you need to do to turn on your GilletteLabs Heated Razor is press the power button to activate the warming bar. The LEDs will then blink until the razor heats up – full heat will be reached within one second. 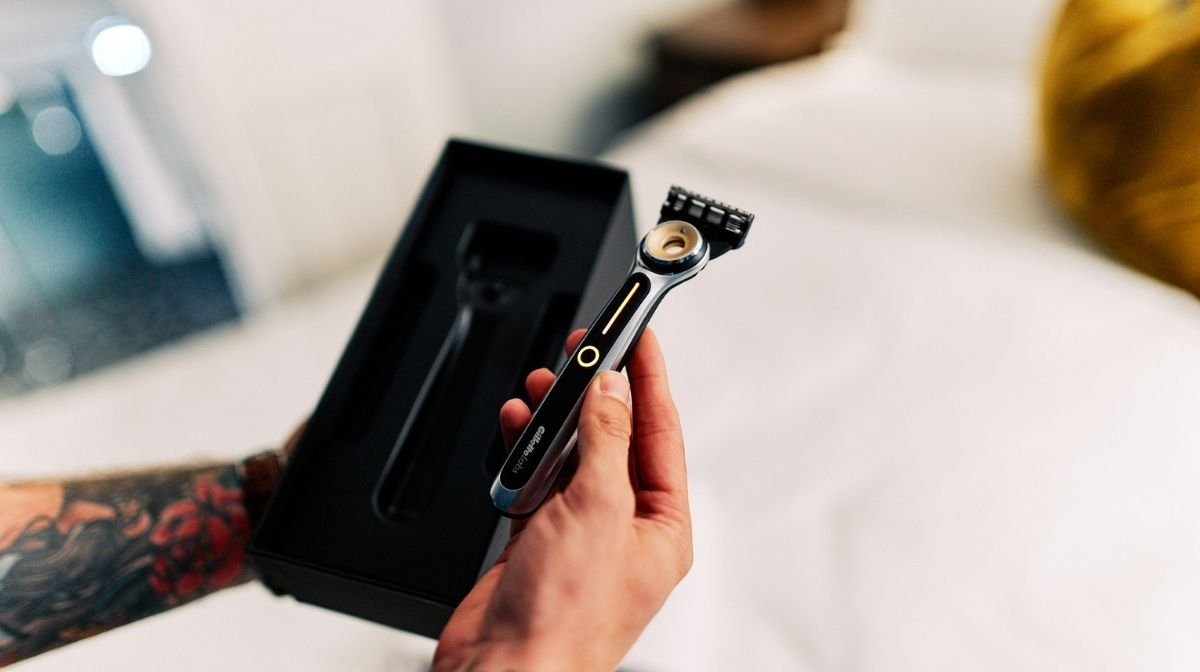 Do I need a special type of electrical outlet for the GilletteLabs Heated Razor?

The Heated Razor has been designed so that the charger can be plugged into any standard UK 2-pin 110-240v electrical shaver socket. Every original Heated Razor sold in the UK comes with a UK 2-pin plug for this purpose.

We also highly recommend that you use the detachable power cord provided with the Heated Razor. Using an alternative could cause damage to the razor, affecting its ability to perform at the highest standard.

How do I know when the battery is low?

When the Heated Razor’s battery is low, the charging indicator will blink when the razor is switched on. At this point, there will be enough battery power left for approximately one shave with the warming bar activated.

When the battery has run down completely, the heating and charging indicators will blink white three times and the razor will turn off. Never attempt to replace the battery.

How do I charge the Heated Razor?

To charge the Heated Razor, place it on the charging dock. When the razor is positioned in the correct upright position, charging will begin automatically.

Charging will be confirmed by frequent white pulsing of both the charging indicator and the dock indicator.

It takes approximately six hours to reach a full charge, which will provide 15-18 minutes of heat. When the Heated Razor is fully charged or when the handle is taken off the charging dock, all indicators will turn off.

Can I use my existing Gillette cartridges on the GilletteLabs Heated Razor?

If you’re running short on Heated Razor blades, you can sign up for a subscription to get them delivered direct to your door. You can currently save 15% on all future blade refills for your Heated Razor when you subscribe, and you can control the frequency of your deliveries, delay a delivery or cancel at any time.

How do I change my Heated Razor blades?

The Heated Razor cartridges can be changed easily, meaning you can make sure your blades are always sharp to deliver their best possible shave.

To eject an old cartridge, simply slide the eject button forward, pressing forward rather than downwards. The warming bar is attached to the handle, and it will fit easily through the Technology Deliver Port on the cartridge.

To attach a new cartridge to your Heated Razor, line up the warming bar on the handle with the port in the cartridge and press firmly, applying even pressure until you hear a click. You can then pull the dispenser away from the cartridge.

How do I change the temperature setting on my GilletteLabs Heated Razor?

You can choose between two levels of warmth (43°C or 50°C) to find your ideal shaving temperature.

The razor will heat to the temperature level you last used the next time you power on the device, so you won’t have to repeat this step.

Can I use pre/post-shave products with the Heated Razor?

We recommend using your usual pre- and post-shave care products when using the GilletteLabs Heated Razor to help you to achieve the best shave possible.

How do I clean my GilletteLabs Heated Razor?

Cleaning any razor blade when shaving is crucial to prevent clogged blades and to help guarantee the best shave possible. We recommend cleaning the device under warm running water until all residue from shaving cream and any potential clogged hair has been removed.

To help with the cleaning process, you may want to use non-abrasive liquid soap, making sure you rinse thoroughly after cleaning. The Heated Razor should be hand-washed only – it should never be placed in a dishwasher. You should also never attempt to manually remove debris from between the blades with an implement such as a toothbrush or tweezer, as this can cause substantial damage to the blades and could compromise the quality of your shave.

Learn more about the luxurious experience of using the GilletteLabs Heated Razor:

Mister Wharff: Feel Like ‘King of the Jungle’ with…

Can You Take A Razor in Hand Luggage?

The 10 Best Grooming Tips for Men

How to Manage Razor Bumps

How to Make a Statement Beard Work for You