Digital Pollution: The Effects of Blue Light on Your Skin

Home › Digital Pollution: The Effects of Blue Light on Your Skin

While the ageing effects of smoking, stress, pollution and UV radiation on our skin are well known, research has shown that prolonged exposure to LED screens – smartphones, computers, tablets, televisions – can also cause damage. This is because of the blue light that these screens emit. But why is blue light so dangerous and what can we do to protect our skin from a threat that is such a core part of our day-to-day lives?

To completely avoid blue light, you’d need to live alone on a desert island. In 2019, separate studies conducted by Santé Publique France and Deloitte found that French people spent 5 hours a day in front of their screen (a 50% increase compared to 10 years ago) and consulted their phones 2,716 times (twice a minute) on average.

During the Covid-19 crisis, when lockdowns were a common occurrence, the study’s figures only rose, with the French getting 7 hours of screen time a day. An accumulation of screen time, in the face of which it is advisable to opt for good preventative measures in order to minimise the skin damage caused by prolonged exposure to blue light. 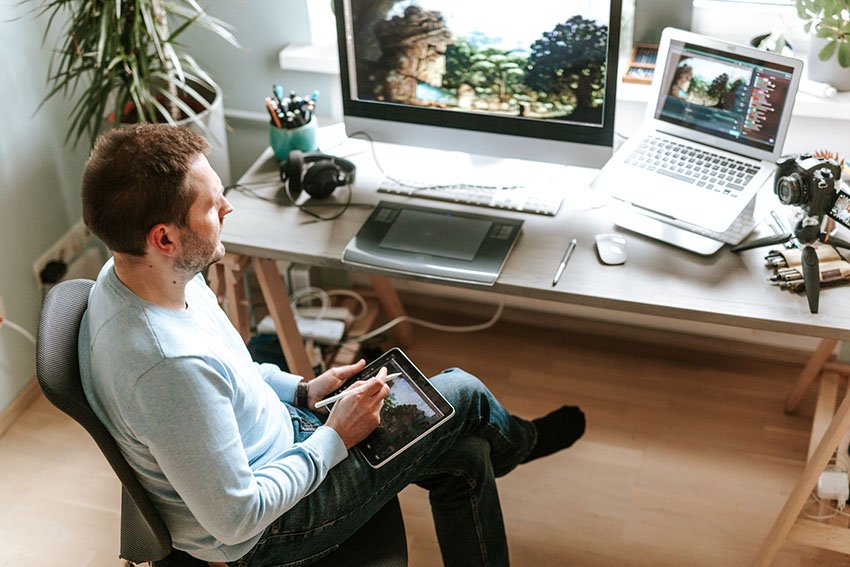 What is Blue Light?

In the solar spectrum, blue light, which is close to ultraviolet light, has a wavelength of about 400 to 700 nanometres. Just like our LED screens, the sun naturally emits blue light.

Several studies tend to show that, in high doses, it can modify the secretion of melatonin, a hormone responsible for regulating sleep and our biological rhythms. It can also cause visual fatigue and is a risk factor for age-related macular degeneration (AMD). But what does it do to our skin?

The Effects of Blue Light on Skin

With a wavelength that can be particularly short (less than 450 nanometres) and therefore highly concentrated, blue light induces premature skin ageing. It can penetrate deep into the skin and thus cause oxidative stress leading to a degradation of cell membranes and a decrease in the production of collagen and elastin, two proteins necessary for the firmness and elasticity of the epidermis.

In August 2018, French researchers from Gattefossé, a cosmetics ingredients company, found that when skin cells were exposed to artificial blue light for 6 hours a day (i.e. 1,952 hours), over a period of 11 months, the structure of their cells were altered. This led them to conclude that continuous exposure to artificial blue light may “contribute to premature photo-ageing of the skin” and “leads to cell exhaustion and probable oxidative stress” (The Journal of Dermatological Science).

This prolonged and repeated exposure was designed to replicate the behavioural patterns of the average user and, although photo-ageing isn’t immediately visible, it’s progressive.

Dullness, redness and pigmentation spots can set in over time, depending on your own screen consumption and skin type. The increased strain on the eye muscles caused by the use of screens can also lead to the appearance of signs of ageing around the eyes.

How to Protect Yourself from Blue Light?

Does this mean that, like being on the beach, you have to apply a high UV protection factor before using your computer?

A daily light UV protection, already recommended by many dermatologists in summer and winter, outdoors and indoors, is the first good measure to block the blue light.

However, you might want to consider, in addition to your usual beard and skincare routine, applying specialised anti-oxidant cosmetics or the consumption of foods containing vitamin A, E, C or beta-carotene.

Foods rich in beta-carotene like spinach, carrots, peppers, mangos, or apricots (basically yellow, red and green fruits and vegetables) are also recommended for healthier-looking skin and facial hair as they prevent oxidative stress.

Anti-blue light cosmetics, over the last few years, have experienced an emergence although there’s currently a lack of scientific studies backing up their effectiveness.

How to Tackle Blackheads

Running Motivation: How to Keep Chasing Your Goals

Why Shave If You Go Swimming?